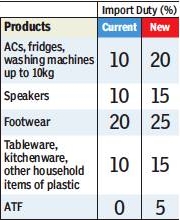 Even air travel may get more expensive as the government has raised import duty on aviation fuel to 5%. So far, fuel could be imported duty free.

Higher duties are part of the government’s plan to reduce non-essential imports, lower the trade deficit and support the rupee, which has depreciated 14% in 2018. While the decision was taken at a meeting convened by PM Modi a few weeks ago, the revenue department announced the tariff hike which will be effective from Wednesday midnight.

The value of these imports was estimated at around Rs.86,000 crore.

Companies said they are looking to raise prices of white goods because some of the compressors will get more expensive.

High-end speakers from companies such as Bose and Sony, too, may cost more. “We are working out price modalities in line with the new duty structure,” an official of one company said, asking not to be identified.

In recent months the government has increased import duty on several products to make it more attractive to make in India and provide a thrust to local manufacturing.

Economists, however, said the latest move may have a limited impact on the widening current account deficit, the gap between exports and imports and other inflows, such as remittances and investment.