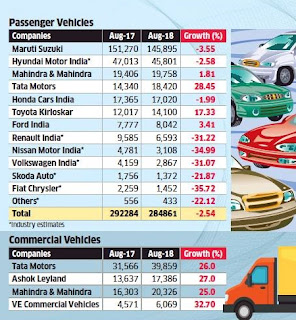 Passenger vehicle sales in India fell for the second consecutive month in August, hurt by the floods in Kerala and due to the high base of last year.

Based on the numbers reported by automakers, August PV sales are estimated to be 2-3% lower than a year earlier, even as demand for commercial vehicles remained strong in the past month.

Industry sources estimate PV sales at about 2.84 lakh units, marginally lower than the previous month. Dispatches to Kerala, which accounts for 8% of the Indian passenger vehicle market, were affected in the second half of August.

Interestingly, the commercial vehicle segment continued its strong run, despite expectations that the new axle rules introduced by the government in July could pull down growth.

Only four of the top 12 carmakers registered sales growth in August. While Tata Motors and Toyota Kirloskar posted strong double-digit expansion of 28% and 17%, respectively, sales at Mahindra & Mahindra grew by 1.8% and at Ford by 3.4%.

Maruti Suzuki, the market leader that has been reporting double-digit growth month after month, too posted an about 3.6% drop in sales, causing the entire market to shrink.

Sales were hurt due to severe floods in Kerala and heavy rains in other parts of the country, claimed Maruti Suzuki. The floods in Kerala not only impacted the usual sales, but also a pickup in demand typically experienced during the Onam festival.

Rising fuel prices, increase in interest rates and new ruling by the insurance regulator to pay premium upfront for multiple years are factors that could pose headwinds in the coming months. However, with rising GDP, normal monsoon in most parts of the country along with the introduction of new models and festivities around the corner, vehicle makers are hoping for a bounce back in demand after a temporary lull.

In the commercial vehicle segment, sales continued to remain strong with the economy growing at its fastest pace in recent times. All the top four manufacturers — Tata Motors, Ashok Leyland, Mahindra and VE Commercial Vehicles — registered 25% or higher growth in the past month.