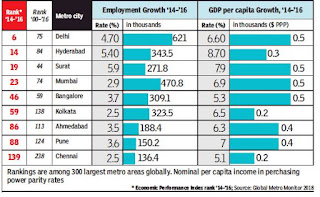 Delhi metro area (capital and its neighbouring towns) outperformed other Indian metro areas on the two strongest magnets of migration—job opportunities and standard of living. During 2014-16 Delhi created 6.21 lakh jobs and added $500 (PPP) to its per capita income, which was highest among all metros in the country. In growth rate of income Hyderabad did better and in growth rate of jobs Surat beat others. Greater Mumbai was the fourth overall best performer. Global top 3 metros are Dublin, San Jose and Chengdu (China)