Gangtok gets an airport 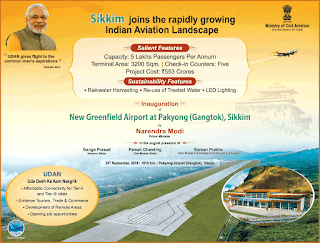 Prime Minister Narendra Modi inaugurated the Pakyong airport in Sikkim, putting the Himalayan state on the aviation map. Located 30 km from Gangtok, Pakyong will become the country’s 100th operational airport when the first scheduled flight lands there on October 4.

The 201-acre picturesque airport is located at an altitude of 4,500 ft above sea level and has a 1,700-metre tabletop runway certified for operations of small fixed wing aircraft like ATR, CRJ and Bombardiers. It was constructed at a cost of Rs.605 crore after shaving off a mountain top to build the runway.

“With Pakyong, we have hit a century. In 67 years since Independence, we had just 65 airports, less than one airport per year. In the past four years, we have added 35 new airports at the rate of nine airports a year,” the PM said.

For Sikkim’s citizens and tourists to the state, the 75-minute flight from Kolkata will cut down commute time and expense. Till now, one had to take a 10-and-a-half hour train journey to New Jalpaiguri or an hour’s flight to Bagdogra in West Bengal and then drive down National Highway 10 for four hours to reach Gangtok.

The airport also frees the state from the vulnerability of blockades during statehood agitations in Darjeeling.