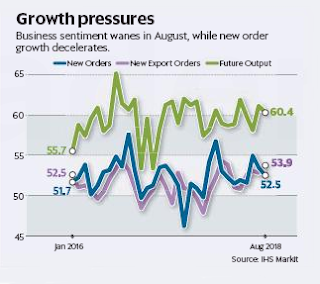 India’s manufacturing momentum further faded in August as the Nikkei India Manufacturing Purchasing Managers’ Index to 51.7 from 52.3 in July.

Even though the seasonally adjusted headline PMI reading remained in expansion territory, it is well below the 53.2 level recorded in June. A reading above 50 shows expansion, while the one below 50 indicates contraction from the previous month.

Tepid growth in domestic new orders, coupled with rising input cost pressures, weighed on manufacturers’ business confidence. While companies retained their optimistic output projections for the next 12 months, the level of optimism eased from July’s three month-high and remained below the historical average.

A silver lining was the surge in export orders, which rose for the tenth consecutive month in August. Moreover, the rate of expansion accelerated to the strongest since Febuary.

That said, since imports are also likely to remain at elevated levels, it is expected to negate the benefits arising from improving exports.

The PMI data suggests that after the sharp rise in manufacturing output in June quarter GDP numbers, the momentum has waned. Considering input cost inflation and limited ability of firms to raise prices, the scenario in India’s manufacturing sector may not be as hunky-dory as the quarterly GDP numbers project.