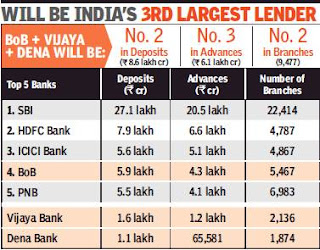 The government announced the merger of three state-run banks —Bank of Baroda, Dena Bank and Vijaya Bank—to create the country’s third largest lender, setting off consolidation in the nationalised banking space after years of discussion.

The decision was taken by a ministerial panel comprising finance minister Arun Jaitley, railway minister Piyush Goyal and defence minister Nirmala Sitharaman late Monday afternoon and announced less than an hour later. “Aspirations of the fastest growing economy have to be supported by stronger and globally competitive banks, with increased choices to the stakeholders. The boards of Vijaya Bank, Dena Bank and Bank of Baroda have been advised by the Alternate Mechanism (the ministerial panel) to consider the proposal (for consolidation),” financial services secretary Rajiv Kumar said at a press conference.

The dates for the board meetings have not been fixed yet as the banks will await a formal communication from the government. But officials said the process would take about six months, including shareholder, regulatory and government approvals. The board approvals are seen as a formality after which the details of the share swap ratio will be worked out. Kumar assured the banks of providing capital till the deal was completed. The name of the new entity is still to be decided, Jaitley said.

This is the fourth major restructuring in the financial sector initiated by the Narendra Modi government. It kicked off with the merger of State Bank of India’s five associate banks with their parent along with Bharatiya Mahila Bank. Then, the government announced the merger of three staterun general insurers, while allowing LIC to acquire a majority stake in troubled lender IDBI Bank.

While announcing the amalgamation of BoB, Dena and Vijaya Bank, the finance minister sought to assure employees that their jobs will be protected and service conditions won’t be diluted.

No employee will face a service condition that is in anyway adverse to his present one. On the contrary, the SBI experience has been that among the merging and new entities, the best of the service conditions continue to apply to all of them,” Jaitley said. The government believes that the merger will improve the operational synergy of the three banks and is part of a plan to create larger Indian lenders instead of smaller entities vying for the same business. Public sector players have been grappling with a mounting pile of NPAs or bad loans and several of them are in the red and have seen massive doses of equity infusion from the Centre to stay afloat.

In fact, Dena Bank is amongst the weakest in the country with its fragile financial position forcing the Reserve Bank of India to impose restrictions on its lending.