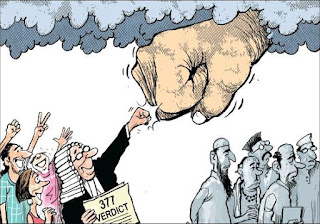 Defanging a 158-year-old Victorian era law, the Supreme Court, in a landmark judgment, legalised consensual sexual relations among gay adults by partially striking down Section 377—a momentous event, perhaps the first step towards the gradual embrace of the LGBTQ community and hesitant acquiescence of alternative sexuality.

In a unanimous 5-0 verdict, Chief Justice of India Dipak Misra led Justices R F Nariman, A M Khanwilkar, D Y Chandrachud and Indu Malhotra in declaring that a two-judge bench’s decision in December 2013 in the Suresh Koushal case, which had re-criminalised Section 377, was “arbitrary, fallacious and retrograde”.

In the Suresh Koushal case, the SC had reversed a Delhi high court verdict which had decriminalised gay sex among consenting adults by reading down the controversial Section 377.

As it righted the error it made five years ago with yet another verdict which seeks to expand personal freedoms, the court invoked “transformative constitutionalism” and struck a confessional note, saying “history owed an apology to LGBTQ members and their families” for the wrongs inflicted on them.

In the four concurrent opinions cumulatively running into 493 pages that abhorred imposition of the majoritarian view on the LGBTQ community to snuff out their fundamental rights, Chief Justice Misra, writing for Justice Khanwilkar and himself, said targeting LGBTQ community members for their sexual preference violated their fundamental right to equality (Article 14), right to freedom of expression (Article 19) and right to choice coupled with right to dignity (Article 21).

Section 377 IPC, so far as it penalises any consensual sexual relationship between two adults, be it homosexuals (man and man), heterosexuals (man and woman) or lesbians (woman and woman), cannot be regarded as constitutional. However, if anyone, by which we mean both a man and a woman, engages in any kind of sexual activity with an animal, the said aspect of Section 377 is constitutional and it shall remain a penal offence under Section 377 IPC,” the CJI said. 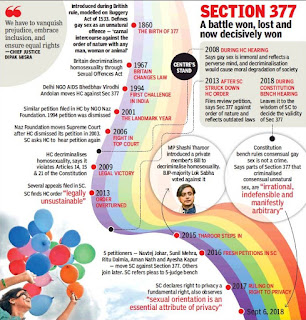 The CJI, who read the judgment for Justice Khanwilkar and himself to begin the pronouncement of verdict, started by saying there were four separate but concurrent opinions. The tense anticipation inside the court melted the moment he said Section 377 was partially struck down to decriminalise gay sex. Only the strict court etiquette prevented gathered LGBTQ members from applauding in relief.

Justice Nariman said, “Persons who are homosexuals have a fundamental right to live with dignity... We further declare that such groups (LGBTQ) are entitled to the protection of equal laws, and are entitled to be treated in society as human beings without any stigma being attached to any of them. We further direct that Section 377 insofar as it criminalises homosexual sex and transgender sex between consenting adults is unconstitutional.” He directed the Centre to take all measures for wide publicity of the judgment at regular intervals through media and also initiate sensitisation programmes for society, government and police officials to “reduce and finally eliminate the stigma associated with such persons” by making them aware of the plight of the LGBTQ community.

Justice Chandrachud, who authored the lengthiest judgment at 181 pages, said it was axiomatic that lesbians, gays, bisexuals, transgenders and queer members continued to be denied a truly equal citizenship seven decades after Independence. “The law has imposed upon them a morality which is an anachronism. Their entitlement should be as equal participants in a society governed by the morality of the Constitution. That in essence is what Section 377 denies to them. The shadows of a receding past confront their quest for fulfilment,” he said.Justice Chandrachud was cited by colleague judges for laying the foundation for liberating the LGBTQ community from Section 377 as he, in the Puttaswamy judgment in August last year, had ruled that sexual orientation was part of right to life and indirectly said that the Suresh Koushal judgment was not in sync with constitutional ethos.

“It is difficult to right the wrongs of history. But we can certainly set the course for the future. That we can do by saying, as I propose to say in this case, that lesbians, gays, bisexuals and transgenders have a constitutional right to equal citizenship in all its manifestations. Sexual orientation is recognised and protected by the Constitution,” he said. Justice Malhotra, writing a 50-page judgment, said, “History owes an apology to the members of this community and their families, for the delay in providing redressal for the ignominy and ostracism that they suffered through centuries. The members were compelled to live in fear of reprisal and persecution. This was on account of ignorance of majority to recognise that homosexuality is a natural condition, part of a range of human sexuality. 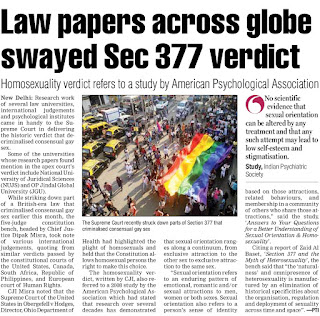