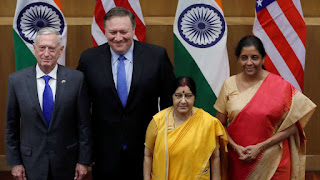 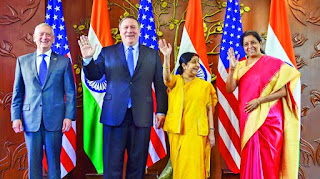 An intensifying strategic embrace marked the first India-US ‘2 plus 2’ dialogue with the inking of ‘Comcasa’, a defence pact that breaks historical barriers, allowing India to access encrypted technologies, and a pointed call to Pakistan to desist using terror proxies.

The dialogue and agreements commit New Delhi and Washington to working together on the open seas, with critical emphasis on the Indo-Pacific with its implied reference to China, sensitive technology and counter-terrorism even though trade and economic disputes remain unresolved.

The tone for the talks was set by the special gesture of foreign minister Sushma Swaraj and defence minister Nirmala Sitharaman receiving counterparts Mike Pompeo and James Mattis at the airport on Wednesday evening.

The tenor of discussions on Thursday made it evident that there would be no combative negotiation on a laundry list of issues. The reference to Pakistan and use of terror proxies closely reflects India’s concerns and a growing impatience of the Trump administration, with Islamabad backing anti-US Taliban in Afghanistan even as it awaits the new government’s actions.

Sources said the four leaders set a broad direction, describing the talks as “positive and constructive”. With both sides willing to listen, convergence was the buzzword and after the dialogue, Pompeo and Mattis called on PM Narendra Modi, a meeting that lasted for almost an hour. The most important takeaway was the signature of Comcasa. The pact will facilitate access to “advanced defence systems and enable India to optimally utilise its existing US-origin platforms”, a joint statement said.

The “foundational” pact will help services of both countries to advance interoperability, as US becomes one of India’s closest defence partners. Comcasa comes into effect immediately, and is actually an enabling agreement, with terms that apply to all US-origin platforms that India has already bought or plans to buy.

In discussions on Iran sanctions, US made it clear that it expects a sharp reduction of energy imports by India. Swaraj insisted India was an energy-reliant economy. But it appears there may be a carve-out for Chabahar port, as was the case in previous sanctions legislation too. India has been developing the port as an access to Afghanistan free of Pakistan’s influence. At a press conference, Pompeo said the US understood that countries like India will “take time to unwind” even as he said India had been told that sanctions on Iranian crude oil will be enforced on November 4. Though waivers will be considered, US expects purchase of Iranian crude to go to zero.

While Indian officials said they did not raise CAATSA and sanctions on Russia (a major Indian defence partner), they were assured by Mattis that “legacy platforms” will be respected. Pompeo said, “With respect to S-400, no decision was made. We are working to impose CAATSA Section 231 in a way that is lawful and to exercise that waiver only where it makes sense.”

The joint statement “welcomed inclusion of India by the US among the top tier of countries entitled to license-free exports, re-exports, and transfers under License Exception Strategic Trade Authorization.” The two countries also announced readiness to begin negotiations on an industrial security annex to support closer defence industry cooperation.

As expected ‘Indo-Pacific’ took up most time. Pompeo said, “India and the US United States have a natural starting point for advancing a free and open Indo-Pacific.” The time taken on this issue signalled its importance as India and US seek to build a counter-narrative to China’s aggressive moves..