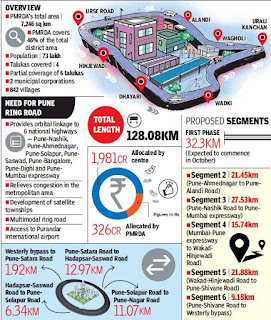 The PMRDA will start work on the proposed first phase of the 128 km ring road, from Satara Road to Ahmednagar Road, in October.

Officials of the Pune Metropolitan Region Development Authority said tenders for the service roads have been approved and the Centre has agreed to sanction funds for the main carriageway.

PMRDA commissioner Kiran Gitte said, “Work on the first phase of the ring road (32.3 km) should start in October. The PMRDA will use Rs.326 crore of its own funds to build the service lanes for the proposed first phase, while the Centre is expected to release Rs.1,981 crore for the main carriageway.”

The total cost of the project is Rs.23,828 crore, of which the Centre will give Rs.10,234 crore, while the remaining Rs.13,594 crore will have to be generated through town planning schemes and other means. The PMRDA will acquire land through town planning schemes, raising FSI or through TDR for the 97 km stretch of the ring road, while for the remaining 31 km, the land will be purchased directly from the land owners after negotiations.

The PMRDA officials said the first phase — Satara Road to Ahmednagar Road — is expected to see a spurt in traffic movement in the coming years. “It will be followed by the second phase, from Ahmednagar Road to Nashik Road,” they said.

Gitte said the project will be taken up on priority and be executed at the earliest. “We are waiting for the Maharashtra Airport Development Company’s detailed project report for the airport. Once the it is ready, we will know the expanse of the project,” he added.