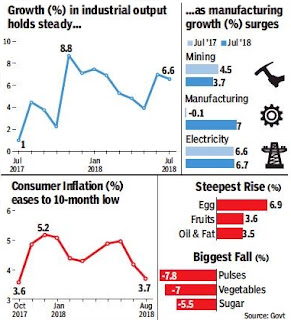 Retail inflation cooled to a 10-month low in August on the back of easing food prices, while industrial output growth held above the 6% mark in July, bringing some relief for policymakers battling turbulence in the currency and stock markets.

Inflation, as measured by the consumer price index, rose an annual 3.7% in August, slower than previous month’s 4.2%. Rural retail inflation was at 3.4%, while urban areas recorded 3.9%. The food price index slowed to 0.3% in August compared with 1.3% in the previous month.

Economists said the dip in August retail inflation below the Monetary Policy Committee’s medium-term target of 4%, juxtaposed by the looming inflation risks, robust GDP growth for the first quarter and continued weakening of the rupee, would complicate the next monetary policy decision in October.

Most economists said they expect RBI to hike rates to calm financial markets, particularly the rupee, which has weakened over 11% to emerge as Asia’s worst performing currency this year, hit by high oil prices and selloff in emerging markets.

Separate data showed the index of industrial production rose an annual 6.6% in July, marginally lower than the revised 6.9% in June but higher than 1% growth recorded in July 2017. In April-July, the sector grew 5.4% compared with 1.7% in the same period a year earlier.

Economists said they expect the buoyancy to sustain due to the festival demand in the months ahead.