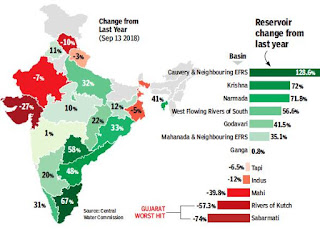 June was a good month: monsoon hit Kerala on time and most of the country, barring four states, got decent rain. By mid-June, rainfall was actually 20% in excess. Things got choppy after that – heavy rain in parts, deficit in others. So, by August 8, there was a 10% deficit. This shrunk to 6% by end of the month, but by September 11, deficit was up to 8%.

All this, coupled with how it has rained in the previous years, led to some reservoirs running dry while some are overflowing. Gujarat has been among the worst hit, with reservoirs linked to river Sabarmati 74% drier than last year.

It’s exactly the opposite down south. There, the reservoirs are overflowing. Tamil Nadu’s reservoirs now have 67% more water than in 2017.