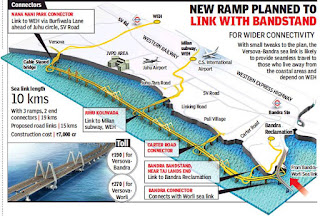 Work on the much awaited Versova-Bandra Sea Link is set to start next month, with the Maharashtra state infrastructure arm, MSRDC, signing an agreement with Reliance Infrastructure consortium for the Rs.7,000 crore project. The eight-lane toll bridge, scheduled to be completed by mid-2023, will reduce the 90-minute travel between Bandra and Versova to 10 minutes.

To ensure seamless travel for motorists from across the western suburbs, the project plan has been tweaked by including an extra ramp, and providing for links to major roads. Now, the bridge will have three ramps midway: at Juhu Koliwada to link with the Western Express Highway, at Carter Road and at Bandra to link with Reclamation via Bandstand. The southern end of the bridge would connect to the Bandra-Worli Sea Link, while in the north it would end near Nana Nani Park in Versova, and will have road link up to SV Road in Andheri.

“The bridge will attract around 70,000 vehicles, including a major quantum of the 42,000 vehicles taking the Bandra-Worli Sea Link,” said Radhyesham Mopalwar, MD, Maharashtra State Road Development Corporation. To speed up the Rs.7,000 crore project, MSRDC has announced that the Reliance Infrastructure-Astaldi joint-venture would get a Rs.350 crore bonus if the sea link is ready six months before the deadline.

The project would allow Mumbaikars to have hasslefree connectivity from Worli to Versova with just one toll stoppage as the existing toll plaza will be merged with the one on the new bridge.