Economy in a tight spot 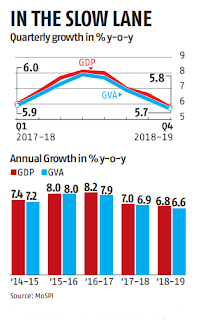 India’s economy grew slower than expected to a 20-quarter low in the January-March period, dragging overall growth to a five-year low in FY19, presenting the first big challenge for the second Narendra Modi government that took charge. Following on from this, the central bank is widely expected to cut interest rates further next week to bolster the flagging economy.

The provisional estimates for FY19 released showed that the economy grew 5.8% in the fourth quarter of FY19 against 6.6% in the preceding one and 8.1% in the year earlier.

Overall growth for FY19 slumped to a five-year low of 6.8% compared with 7% projected in the second advance estimates released in February. Full-year growth in value added terms was lower at 6.6%, compared with 6.9% in FY18.

China’s economy, in comparison, grew 6.4% in the quarter ended March but for the full year, India still remained the fastest-growing major economy in the world.

NBFCs have been under liquidity pressure after the shock default by IL&FS in September last year.

The new government’s first budget, to be presented by finance minister Nirmala Sitharaman on July 5, is expected to include measures to lift economic growth and revive demand. Sitharaman took charge of the ministry.

Private final consumption expenditure in the year rose 8.1% and capital investment as measured by gross fixed capital formation expanded 10% from 9.3% in the previous fiscal.

While some experts expect the formation of the new government will provide an impetus to the economy, others felt there could be more pain ahead.

The government’s ability to provide a big spending push could be limited.

Agriculture contracted 0.1% in the fourth quarter against 2.8% growth in the third quarter and 6.5% growth in the corresponding period last year. Manufacturing growth slowed to 3.1% from 6.4% in the trailing quarter.

After the formation of the government, all eyes are on the Reserve Bank of India. It has lowered the key rate twice in succession and is expected to reduce it further. Economists expect more rate cuts amid projections of a weak first quarter of FY20. The next monetary policy announcement is on June 6.

A further reduction in rates is expected to lift sagging consumer demand. Passenger vehicle sales grew at their slowest in five years, at 2.7% in FY19.