Modi Sarkar 2.0 Gets Down to Business

The composition of the council of ministers of the National Democratic Alliance government and the allocation of portfolios bears the imprint of Prime Minister Narendra Modi, who has brought in fresh talent on his terms, rewarded performance, and sought to achieve the right political balance without compromising on key target areas.

The Prime Minister’s Office will be the central driving force and with party president Amit Shah being inducted in the Cabinet, the concentration of power will be firmly with the government, according to people familiar with the ministry formation process. Nirmala Sitharaman was made finance minister in place of Arun Jaitley, who opted to stay out of the government due to health issues.

Just as Modi had prevailed in making Shah, his trusted lieutenant, the Bharatiya Janata Party chief in 2014 despite reservations in some quarters that both the PM and the party chief should not be from the same state, he has now virtually made Shah the next most powerful minister by giving him home ministry.

Rajnath Singh, who made way for Shah to become BJP chief in 2014, was moved to the defence ministry. He, however, will officially retain the number two status in the seniority list.

Shah has had a brilliant run as BJP president, delivering a string of electoral victories and capping it with the stupendous victory in the Lok Sabha elections.

The induction of former foreign secretary S Jaishankar as external affairs minister after Sushma Swaraj bowed out due to health issues conveys that the PM was not bogged down by fear of controversy in making a bold move aimed at shoring up India’s global profile.

Modi has rewarded those he considered ‘performing ministers’, such as Nitin Gadkari, Piyush Goyal, Dharmendra Pradhan, Ravi Shankar Prasad, RK Singh and Hardeep Puri by retaining them in their earlier ministries, and giving additional responsibilities to some. This will help maintain continuity in projects being implemented by these departments.

Gadkari’s work in the roads and highways ministry was appreciated even by the Opposition.

Pradhan has been put at the helm of the steel ministry this time, in addition to petroleum & natural gas. This ministry is to Odisha what railways has been for Bihar — with even Naveen Patnaik handling it during his short stint in the Atal Bihari Vajpayee government before he became the state’s chief minister. The Ujjwala scheme run by the petroleum ministry under Pradhan proved to be a big vote-catcher for the BJP in the recent Lok Sabha polls.

Goyal will continue in railways to oversee completion of projects initiated during the previous government. He has also got the important commerce & industry portfolio, where Suresh Prabhu failed to deliver.

The Prime Minister has given chemicals & fertilisers to DV Sadananda Gowda. The ministry was earlier handled by another Karnataka leader, the late Ananth Kumar. The parliamentary affairs ministry has been handed to Pralhad Joshi, another senior leader from Karnataka. Perhaps, the intent is to not just use his parliamentary experience but also reach out to political parties down south — where the BJP is not strong — for support in Parliament.

Though some of the ministers have reportedly been inducted at the insistence of the Rashtriya Swayamsevak Sangh, they by and large qualify on the basis of their record as well. Since the PMO will exercise strong oversight and all major decisions will bear its stamp, talent deficit in some of the ministers is not likely to be a handicap, sources said.

Modi has also dealt with NDA partners on BJP’s terms. 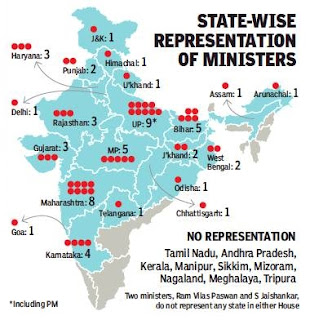