BK Birla: End of an Era 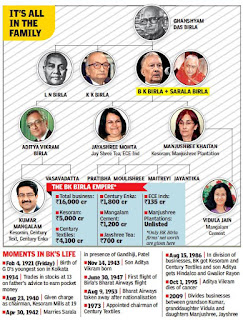 Basant Kumar Birla, the grand old man of Indian industry, passed away at his Mumbai residence. He was 98 and is survived by his grandson, Kumar Mangalam Birla, daughters Manjushree Khaitan and Jayshree Mohta, and an extended family of nephews, nieces, grandchildren and great-grandchildren.

‘B K Babu’ or ‘Basant Babu’ as he was fondly called by his peers and juniors, was the last surviving member of a generation of industry greats, who included JRD Tata (the two pre-eminent business families also lent their surnames to the ‘Tata-Birla’ duopoly in the pre-Ambani and pre-liberalisation days).

Besides being among post-Independence India’s first generation of industrialists who helped shape India Inc’s growth, the Birla family patriarch also enjoyed close relationships with national leaders, including Mahatma Gandhi and Sardar Vallabhbhai Patel. Sardar Patel, in fact, was said to have played a part in his marriage (in 1941) to Sarala.

Birla’s cremation will take place in Kolkata on Thursday in accordance with his “express wishes”, family members said.

President Ramnath Kovind, Bengal CM Mamata Banerjee and Tata Trusts chairman Ratan N Tata were among the first to condole the death. “Sorry to hear about the passing away of veteran industrialist Shri B K Birla. He made crucial contributions to business, education and several social causes,” Kovind said. Birla’s death creates a void that cannot be filled, the Bengal CM said, recalling the 2013 Banga Bibhushan honour the state conferred on him.

Son of the illustrious Ghanshyam Das Birla, B K Birla started his career at the bottom of the rung — as a junior employee in Kesoram Industries. He diversified the business from textile and jute and entered sectors like cement, tyre, chemicals and engineering, turning the B K Birla Group into a Rs.16,000-crore business empire, of which he was the chairman till he breathed his last. The group now comprises five major companies — Kesoram Industries, Century Textiles & Industries, Century Enka, Mangalam Cement and ECE Industries — and several smaller, unlisted entities.

What marked him out, his juniors said, was his enthusiasm to take risks. Birla Tyres (a part of Kesoram) entered the radial segment, considered to be the tyre industry’s future, with an investment of over Rs.800 crore — setting up two facilities in Haridwar and Balasore in 2013-14 — when Birla was 93. The group also kept investing in two cement units — Kesoram Cement and Vasavdatta Cement — to increase combined production capacity to over 7 million tonnes.

Like Kesoram, he also transformed another family business — Century Textiles and Industries — into a diversified company with interests in cement, paper and textiles. Entities like Century Enka, Mangalam Cement, ECE Industries, Mangalam Timber and Jayshree Tea & Industries were all set up, one after the other, under his close watch.

He was considered a pioneer in another area: setting up joint ventures with global majors. He roped in Akzo Noble for Century Enka, now a leading manufacturer of nylon tyre cords, back in 1969. Family, friends and colleagues remember him as a visionary who guided Indian industry through its infancy.

He was also a keen photographer, who saw the transformation from analogue to digital photography (just as he saw the transformation of Indian industry to its post-liberalisation days under Manmohan Singh). He kept a camera, gifted by his dad, till well into the 21st century — its replacement was a Leica digital, which he cherished till his last vacation to Europe a few years ago (London and Switzerland remained his favourite destinations till he could travel).

Another favourite destination — closer home — was the group headquarters, Birla Building, in the heart of old Kolkata. He spent most of his time at the 15th-floor office on R N Mukherjee Road, discussing with nephew, S K Birla, till four years ago.

Birla was also one of the oldest members of the Calcutta Club, one of his favourite haunts in the city along with Sangeet Kala Academy and Birla Academy (which has a collection of more than 2,000 paintings). His hometown’s gradual decline was an abiding pain though he never lost hope in “his city”.