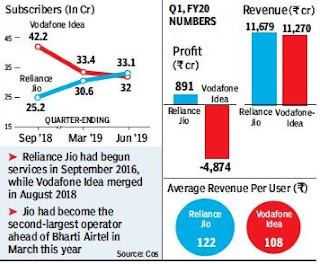 Less than three years after making a re-entry into the telecom business, Mukesh Ambani’s Reliance Jio has emerged as the country’s largest mobile operator, edging out Vodafone-Idea from the top position. Jio has also made more revenue than Vodafone-Idea in April-June quarter.

Jio had started operations in September 2016 and finished the quarter ending June 30, 2019 with a subscriber base of 33.1 crore. Compared to this, Vodafone-Idea had 32 crore users in the same period as the company continued to shed low-spending customers as part of a new business strategy.

For the new 4G-only telecom entrant — which had moved ahead of Bharti Airtel in March this year — the growth has been swift and profitable, despite its charge being led by dirt-cheap tariffs and free voice calling.

For Jio’s rivals, going remains tough. Airtel is struggling to get back into profitability. Vodafone-Idea said on Friday that its April-June loss stood at Rs.4,874 crore. The company had reported a loss of Rs.4,882 crore during the fourth quarter of 2018-19.