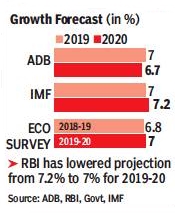 The International Monetary Fund cut India’s growth estimates for 2019 and 2020, citing a weaker than expected outlook for domestic demand.

The multilateral agency also cut China’s growth estimates due to impact of a string of factors, including the trade war with the US. This means that India continues to remain the fastest growing major economy in the world, despite the slowdown that has set in.

“India’s economy is set to grow at 7% in 2019, picking up to 7.2% in 2020. The downward revision of 0.3 percentage point for both years reflects a weaker-than-expected outlook for domestic demand,” the IMF said in its World Economic Outlook update.

The growth estimates for India are in line with other agencies such as the Asian Development Bank and the RBI as well as the Economic Survey for 2018-19, which estimates growth for 2019-20 at 7%. The RBI has cut GDP growth estimates, citing weak domestic demand, investment and sluggish exports due to slowdown in global demand triggered by the US-China trade war. It also said that private consumption has weakened, particularly in rural areas, which could hurt overall growth.

In China, negative effects of escalating tariffs and weakening external demand have added pressure to an economy already in the midst of a structural slowdown, and needed regulatory strengthening to rein in high dependence on debt, IMF said.

“With policy stimulus expected to support activity in the face of the adverse external shock, growth is forecast at 6.2% in 2019 and 6.0% in 2020 — 0.1 percentage point lower each year relative to the April projection,” IMF said.

The agency also reduced growth estimates for the global economy. Global growth is forecast at 3.2% in 2019, picking up to 3.5% in 2020 (0.1 percentage point lower than in the April WEO projections for both years). GDP releases so far this year, together with generally softening inflation, point to weaker-than anticipated global activity,” the agency said. “The projected growth pickup in 2020 is precarious,” the agency said in its update.