Mumbai Goes Under Water Once Again 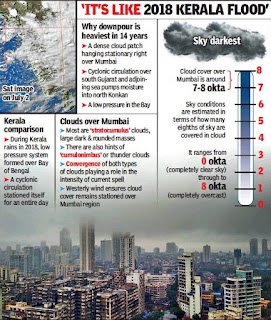 Twenty three people have been killed in rain-related incidents in Mumbai since Monday when the financial capital recorded the second highest rainfall in 45 years.

Torrential rains relented only in patches and brought the city to a halt by submerging roads and railway tracks. In suburban Malad’s Kurar village, a wall adjoining slums collapsed at midnight, leading to death of 21 people and injuries to 50 others.

Two more men were reported to be killed in Malad after their SUV got stuck in a subway. Trapped at around 11.30 pm on Monday night, the youth kept calling for help from the car and their cell phones but no one could rescue them. The bodies were taken out from the car on Tuesday morning. With more rains forecast for the day the state government declared a public holiday and the BMC shut down schools and colleges. Both the government and the BMC need not have bothered simply because there was so much water on the roads that no travel was possible.

In fact, many who had gone to work on Monday were not able to reach home till Tuesday evening. Trains too bore the brunt of it as the Central Railway announced on Monday night that it had decided to shut its services due to the huge amount of water on the tracks. By Tuesday evening the services are still to be on track. Western Railway services was delayed but running on Tuesday.

The National Disaster Response Force and even the Indian Navy had to be pressed into action to help rescue people in Kurla.

The BJP-led Maharashtra government and specifically its parter Shiv Sena, which has run BMC for many decades, came in for had to face the brunt of criticism.

Mumbai receiving heavy downpour in two days points towards an irregular pattern of rainfall that is now becoming regular, according to a climate study expert, who compared it with last year's Kerala rains.

“Winds from Arabian sea were coming towards the city and an upper level circulation was active. During such times, the cyclonic circulation formed shifts north to south but sometimes because of favourable wind condition the cyclonic circulation stays at one position for a long time. This gives rise to very heavy rains,” said Sridhar Balasubramanian, associate professor, department of mechanical engineering, and associate faculty IDP Climate Studies, IIT Bombay. He further said, “Last year Kerala too received heavy rains owing to a similar kind of situation. There was a low pressure system forming in the Bay of Bengal and then there was a cyclonic circulation which stationed itself for an entire day.”

According to meteorologists, an array of weather systems are working in tandem. Anupam Kashyapi, head of weather, IMD, Pune, said, “The westerly wind flow is ensuring that the cloud cover hovers over this region. Most of these clouds are ‘stratocumulus’ clouds, which are large dark and rounded masses. With the lightning and thunder activity in Mumbai on Monday, we have also observed hints of ‘cumulonimbus’ or thunder clouds in this setup. The presence of both these types of clouds is also playing a role in the current heavy rains in Mumbai.” Kashyapi said the last few days have seen development of several weather conditions, like the mid-tropospheric cyclonic circulation that has increased rainfall activity. “This system persisted three to four days ago causing heavy rains over north Konkan. It gradually dissipated but has now formed again over the same region. As compared to July 1, the system’s height has increased, causing it to strengthen further. In fact, the system is the strongest currently in comparison to the last few days,” he said.

According to K S Hosalikar, IMD deputy director-general (western region), there was a cloud patch right stationed over Mumbai. “Owing to this, Santacruz recorded over 200 mm rains in six hour,” he said, adding that another reason for the extremely heavy rain spell was a cyclonic circulation over South Gujarat and adjoining sea. "So when you have a circulation and a low pressure in the bay, this gives vigorous monsoon conditions," he added.