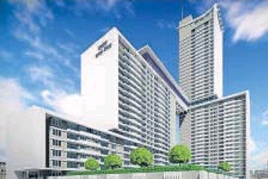 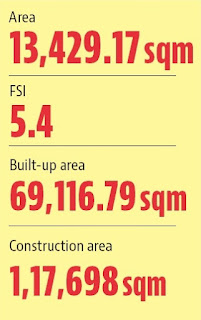 Nariman Point is set to get its tallest residential high-rise – a 40-storey tower – to house legislators.

With the decks cleared for redevelopment of the state government’s Manora MLA hostel, chief minister Devendra Fadnavis laid the foundation stone for two towers in the high-rise – a 25-storey and the 40-storey one. At an estimated cost of ₹350 crore, all 366 legislators will get a two-bedroom apartment each , with a private office here.

The redevelopment of the MLA hostel was on the cards for a few years, with portions of the building falling off and bamboo being used for support. “This will be the tallest tower in Nariman Point. Currently, there are 32-35 storey buildings. Coupled with podium parking, the tower will be 41-42 storey,” said architect Shashi Prabhu, whose firm has prepared the design of the towers.

Other tall buildings in the business district are Air India building (25 floors), a 35-storey fivestar hotel and NCPA Apartments (27 floors).

The CM said the MLA hostel has been witness to many good and bad occasions in Maharashtra’s political history. “The decision to build a new building was taken after many small accidents in the MLA hostel. Aesthetics and utility have been taken into consideration in the design of the new building which is prepared by Shashi Prabhu. The building will have over 800 rooms; it will have space for legislators, former legislators, and delegations,” he said. The two towers will be built with a floor space index (FSI) of 5.38. FSI is a proportion of the total construction to the plot.

According to a senior public works department official, each legislator will have about 1,000 sqft carpet accommodation, which will be divided in a twobedroom apartment, in addition to an office space of about 300-350 sqft. “The buildings will accommodate 288 MLAs and 78 MLCs. Currently, we have got the commencement certificate up to the plinth, with an approved FSI of 5.4. The total construction area of the project is 7.72 lakh sqft,” the official said, requesting anonymity. The building will also have parking space for 500 cars, a business centre, clubhouse, gymnasium,medical centre, multi-functional hall, meeting rooms and podium garden. Parking could be allowed for the public when the Assembly is not in session, an official said.

The state will call for global tenders for the project which is expected to be completed in three years after it is awarded. “We are still to secure all permissions, including CRZ clearance. We expect to get them by year-end,” the official said. The state has roped in Central government owned National Buildings Construction Corporation India as project management consultant.