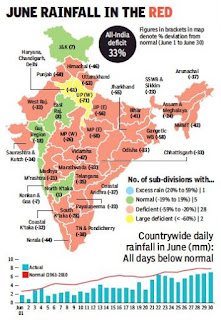 June has ended with a huge countrywide rainfall deficit of 33% of normal, making it the fifth driest month of June in the past 100 years. While monsoon’s performance has so far been way below expectations, met officials say there are indications of good rains in the first half of July.

As many as 30 out of India’s 36 meteorological sub-divisions registered deficient (lower than 20% below normal) or large deficient (60% or less below normal) rainfall during the month. With a huge deficit opening up in June, monsoon will now have to perform at over 102% of average over the next three months in order to finish at 96%, the lower end of the normal range, which was IMD’s forecast for this year’s monsoon.

Monsoon’s failure in June, mainly because of late onset and tardy progress till June 19, comes on the back of weak pre-monsoon rainfall. As per the Central Water Commission’s update late last week, reservoirs in Andhra Pradesh and Maharashtra were at critically low levels of 84% and 77%, respectively, below normal for this time of the year.

Reservoir levels across south India are running very low. However, better news could be in store for the next couple of weeks, with all eyes on a low-pressure system that has formed in the Bay of Bengal and which could intensify into a depression over the next two days. “This system is set to move inland and bring good rainfall over central India as well as some parts of east and north. Monsoon will very likely cover entire central in the next few days and move further into north India,” said D Sivananda Pai, IMD’s lead monsoon forecaster.

IMD has issued red alerts for very heavy falls at several sub-divisions, including Odisha, Chhattisgarh, east MP, Vidarbha and Telangana over the next three-four days.

Private forecaster Skymet has predicted a monsoon surge in the first half of July. “Mumbai is at serious risk of flooding between July 3 and July 5. Close to 200 mm or more rain per day is going to batter the city during this period,” said Skymet MD Jatin Singh.