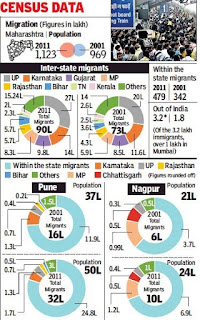 Fresh census numbers indicate that the Mumbai urban agglomeration is seeing fewer migrants from south Indian states. Generalised as ‘Madrasis’ by the locals, people from Karnataka, Tamil Nadu, Kerala and Andhra Pradesh would rather go to other parts of Maharashtra than come to Mumbai.

Evading the exorbitant housing cost of the city, migrants from southern India and Gujarat are finding opportunities in Pune, Nagpur, Nashik and other cities. On the other hand, migration from West Bengal has increased.

For labourers and workers, Maharashtra turns to migrants from central India. The count of migrants from UP, Bihar, Rajasthan and MP has increased, but now, instead of thronging Mumbai, they are distributed across the state, largely in its urban pockets.

While the face of Maharashtra is changing because of the 90 lakh migrants who came from other regions of India, 479 lakh moved within the state, a number that went up from 342 lakh a decade ago. “A lot of this is rural-urban migration and people moving for jobs. This puts pressure on cities that need to cope with this influx,” said Neeraj Hatekar, Mumbai University economics professor.

The story of Pune is another interesting one. Migration has increased at a rapid pace. Mostly from Karnataka and UP, Pune has about 32 lakh migrants. “Pune’s development, its affordable housing and educational facilities have been a magnet for migrants from within the state and outside too,” added Singh. Migration into Nagpur from MP and Chhattisgarh has also increased reflecting the development there.