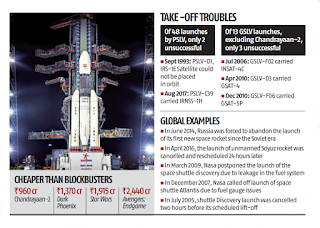 India postponed its second lunar mission, Chandrayaan-2, roughly an hour before blast-off after scientists noticed a glitch in the launch vehicle, delaying its bid to become only the fourth country to land a spacecraft on the moon.

Fifty-six minutes and 24 seconds before the scheduled lift-off at 2.51 am on Monday from Sriharikota in Andhra Pradesh, scientists at the Indian Space Research Organisation noticed a snag in the indigenously built GSLV Mark III, India’s most powerful rocke.

The glitch was detected by the rocket’s inbuilt system.

This is the fifth time India’s second lunar mission has been postponed, but the first time it happened after the assembly of the spacecraft was completed at the country’s only launch site at Sriharikota.

No revised launch schedule was released but a former Isro scientist, who worked on the mission, said scientists were racing to plug the leak in time for a new launch window at the end of the month.

If that window is missed, the next opportunity for launch will come in September, which will necessitate changing the spacecraft’s orbit. This will require more fuel and likely drive up costs of the mission.

All senior Isro officials, including chairperson K Sivan, are investigating what went wrong, but no scientist has been allowed near the rocket because it is still filled with fuel.

The 3,850 kg Chandrayaan-2 consists of an orbiter that will circle the moon for about a year, taking images and testing the atmosphere; a lander named Vikram, after Vikram Sarabhai, known as the father of India’s space exploration; and a rover named Pragyaan, which was scheduled to soft-land between two lunar craters on the south pole of the moon on September 6.

It was to spend 14 days studying the topography, seismography and chemical and mineral composition of lunar rocks and look for water deposits — confirmed by India’s first lunar mission in 2008, Chandrayaan-1, which didn’t land on the moon.

Chandrayaan-2 will follow Chang’e-4, launched by China, which in January became the first spacecraft to successfully land on the far side of the moon. Only three countries — the United States, the erstwhile Soviet Union, and China — have successfully landed missions on the moon.