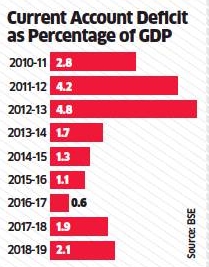 India’ current account deficit — the excess of imports over exports — for FY’19 touched a six-year high of 2.1% of GDP. Experts say even at current levels, the CAD is not alarming as it is considered prudent to have CAD of up to 2.5% of GDP. India’s CAD is largely dependent on three major drivers, namely, crude oil imports which determine the extent of forex outflows, software services income, and inward remittances by the Indian diaspora, which determine the forex inflows. Of these three, since crude accounts for a little over one fourth (27%) of India’s merchandise imports. Hence the trend in crude prices tend to influence CAD. While crude prices have been volatile with some element of cyclicality, software exports and remittances have remained more or less steady sources of forex inflows. The future trend in CAD is largely going to be dependent on way crude prices move or if we lower our dependence on crude.