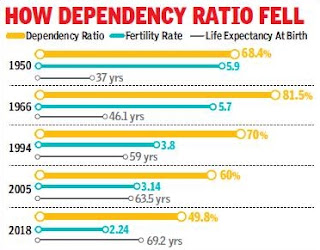 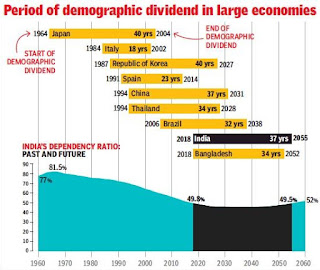 Many Asian economies — Japan, China, South Korea — were able to use this ‘demographic dividend’, defined by the United Nations Population Fund as the growth potential that results from shifts in a population’s age structure. This transition happens largely because of a decrease in the total fertility rate (TFR, which is the number of births per woman) after the increase in life expectancy gets stabilised.

Japan was among the first major economies to experience rapid growth because of changing population structure. The country’s demographic-dividend phase started in 1964 and ended in 2004. An analysis of the first 10 years since this phase shows how such a shift in the population structure can propel growth. In five of these years, Japan grew in double digits; the growth rate was above 8% in two years, and a little less than 6% in one. Growth slid below 5% in only two of these 10 years.

China entered this stage in 1994 — 16 years after Deng Xiaoping’s economic reforms that started in December 1978. Although its growth accelerated immediately after the reforms, the years of demographic dividend helped sustain this rate for a very long period. In the 16 years between 1978 and 1994 (post-reform, pre-dividend) China saw eight years of double-digit growth. In the 18 years since 1994 there have been only two years when China could not cross the 8% growth mark.

Analysing the demographic dividend data for two of the four Asian tiger economies shows similar patterns. (Taiwan has been excluded as historical growth rate data is not available).

It is, however, important to note that this change in population structure alone cannot push growth. There are many other factors. In the late 20th century demographic dividend in Asia resulted in a seven-fold increase in the GDP of many countries. In Latin America the growth was only two-fold, the UNFPA points out in its explanatory note on demographic dividend. The UN agency further states that countries can only harness the economic potential of the youth bulge if they are able to provide good health, quality education and decent employment to its entire population.