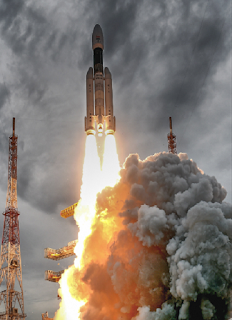 Under an overcast sky at the Sriharikota spaceport, India took a giant leap to Moon.

Indian Space Research Organisation’s GSLV-MkIII carrying Chandrayaan-2 lifted off from Sriharikota at 2.43 pm and, 17 minutes later, injected into a geostationary transfer orbit the lunarcraft comprising an orbiter, a lander and a rover. It is expected to make a soft-landing on Moon at 2.58 am on September 7, making India only the fourth nation – after the US, Russia and China – to achieve such a feat.

It was a better-than-textbook launch as the vehicle took the lunarcraft to an orbit that is 6,000 km higher than planned, thereby saving on fuel and increasing its life span. “We’ve bounced back with flying colours,” Isro chairman K Sivan said soon after the spacecraft was injected into the orbit.

The rocket had been on the launchpad since a technical glitch forced Isro to abort the launch on July 15. “Immediately after the snag was observed, the entire team swung into action. The work done in 24 hours has been mind boggling. The teams forgot about their families, sacrificed their interests and worked non-stop,” he said.

Prime Minister Narendra Modi, who watched the launch live on television, said the event will be etched in the annals of history. “The launch of Chandrayaan-2 illustrates the prowess of our scientists and the determination of 130 crore Indians to scale new frontiers of science. Every Indian is immensely proud today,” he said.

Scientists and thousands of spectators who gathered at Sriharikota cheered every time a critical event of the countdown was announced over the public address system. The biggest applause from the scientists came 132 seconds after lift-off, when the indigenous cryogenic engine (CE-20) – they were worried about it after the July 15 incident – ignited. Chandrayaan-2 is three satellite missions stacked in a single launch. Out of the three, two systems – Vikram (lander) and Pragyan (rover) – are completely new to Isro.

In the past one-and-a-half years, the satellite team has burned the midnight oil reworking on Chandrayaan-2 on the suggestions made by the national committee. They worked without any gap,” Sivan said.

The mission team will perform 15 “very crucial” manoeuvres to take Chandrayaan-2 towards the Moon. “And then, on D-day, we will experience 15 minutes of terror during the final descent of Vikram. We will ensure the Indian flag will fly high,” Sivan said.

The module will remain in Earth’s elliptical orbit for 22 days when five orbit-raising manoeuvres will be carried out to move it away from Earth’s gravitational pull. On the 23rd day, scientists will perform ‘trans-lunar injection’ and Chandrayaan-2 will take the 3,84,000 km path to Moon.

After eight days, project director M Vanitha and mission director Ritu Karidhal will oversee the lunar orbit insertion, the next most challenging manoeuvre. Had it been launched on July 15, Chandrayaan-2 would have reached Moon in 22 days, after which it would have gone around the lunar orbit for 28 days before Vikram’s separation from the orbiter. Now, the module will remain in the 100 km x 100 km lunar orbit for 13 days.

On day 43, lander ‘Vikram’ with rover ‘Pragyan’ will get separated from the orbiter. Vikram will go around the Moon before initiating deboosting procedures on Day 44. On the 48th day, the final descent of Vikram will start.

On landing, Pragyan will come out of Vikram after four hours. During its lifespan of one lunar day (14 Earth days), Pragyan will take images and analyse content on the lunar surface and send back data to Earth within 15 minutes.

The orbiter will continue to circle the Moon for a year. Chandrayaan-2 has on board 14 scientific instruments including Nasa’s ‘laser retroreflector array attached to Vikram. This payload will calculate the distance between Earth and Moon and help detect the exact location of the Moon lander.

The Indian payloads will study the lunar topography, seismography, mineral identification and distribution, surface chemical composition, thermo-physical characteristics of top soil and composition of lunar atmosphere for a new understanding of the origin and evolution of the Moon.