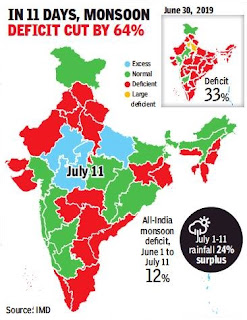 After a dry June, monsoon has made a great start in July. Average countrywide rainfall in the first 11 days of the month has been 24% above normal, which has helped reduce the overall monsoon deficit to almost a third, from 33% at the end of June to 12%.

In what should boost sowing of kharif crops, all regions of the country, except the south, have received surplus rainfall in this 11-day period, with central India getting the maximum share. Till last week area under kharif crops was 27% less than the corresponding period last week, mainly on account of poor rainfall in June. The gap is expected to reduce when the figures are updated on Friday.

India Meteorological Department officials said although the monsoon is likely to go into a weak phase after July 14, some parts of India will continue to get rains.

In association with the trough’s movement, IMD has issued red alerts over the likelihood of very heavy showers at a few places in east UP, Bihar and Assam over the next two days.

Pai said the weak phase may not last very long as a low pressure system is likely to form over Bay of Bengal around July 17-18. “If that happens, rains will resume in central India and parts of the north,” he said.