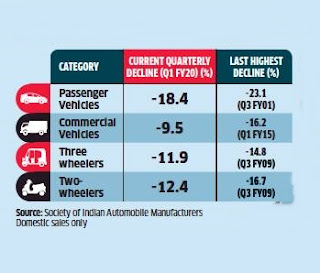 Passenger vehicle production during the month under review stood at 267,600 units, the lowest in 71 months.

SIAM president Rajan Wadhera said the industry is going through a prolonged slowdown, the worst in nearly two decades.

Passenger vehicle sales last quarter fell the sharpest since Q3FY01 when wholesale volumes had dropped by 23%. Ditto with commercial vehicles where quarterly volumes declined the most in five years by 9.53% to 208,298 units.

Given the slowing sales, over 300 dealerships across the country has downed shutter over the past two years. Wadhera said that vehicle manufacturers have not initiated job cuts yet, but added “we cannot survive this for long”. The automobile industry employs 37 million people, directly and indirectly.

Apart from a reduction in producer tax rates, the industry body has also recommended that the government come out with a scrappage scheme to take off old polluting vehicles to trigger sales of new ones.

SIAM said while most automakers have undertaken production cuts to rationalise inventory in the past few months which dragged down wholesale numbers, there should be some recovery in the market festive season onwards. “The last quarter should be good. We are hopeful demand will pick around the festive season. There should also be some pre-buying ahead of the implementation of BS VI emission norms from April 1, 2020,” said Wadhera.

“The government’s push to recapitalize banks and improve liquidity in NBFCs is positive for the economy, benefits of which will start reflecting in the next few quarters,” said Ashish Modani, vice-president, corporate ratings at ICRA.