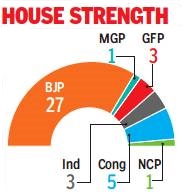 The storm engulfing Congress in Karnataka expanded to Goa with 10 of their MLAs, led by opposition leader Chandrakant Kavalekar, joining BJP ahead of the assembly’s monsoon session beginning on July 15. BJP’s strength in the 40-member house has now gone up to 27, while Congress has been reduced to five.

Chief minister Pramod Sawant is expected to carry out a cabinet reshuffle on Thursday inducting three former Congress MLAs, including Kavalekar as the deputy CM, and deputy speaker Michael Lobo into his ministry after governor Mridula Sinha returns to the state.

Sources said Atanasio Monserrate, who wrested the Panaji seat from BJP represented by the late Manohar Parrikar for 25 years, would also be inducted into the cabinet. Velim MLA Filipe Neri is the other former Congress MLA who would be inducted.

BJP ally Goa Forward Party, which had all its three MLAs as ministers, including the deputy CM’s post that was held by its party president Vijai Sardesai, would be dropped along with Independent MLA and IT and revenue minister Rohan Khaunte. There will be no bypolls as the 10 MLAs constitute two-thirds of the legislative wing as per the Tenth Schedule of the Constitution.

Those who are not part of Wednesday’s split in Congress are four former CMs — Pratapsingh Rane, Digambar Kamat, Ravi Naik and Luizinho Faleiro — while Curtorim MLA Aleixo Reginaldo Lourenco has also remained with the party.

On March 28, BJP had split ally Maharashtrawadi Gomantak Party’s legislature wing by inducting two of its members into the party and had dropped then deputy CM Ramkrishna Dhavalikar. Congress, which had emerged as the single largest party with 17 MLAs in the 2017 assembly polls, is now left with only five MLAs. BJP’s original strength in 2017 was 13.

Speaker Rajesh Patnekar said the 10 Congress MLAs merged their group with BJP and Sawant gave him a letter of change in BJP’s strength in the assembly. “I have accepted both the applications,” he said.

Sawant said the decision to take the Congress MLAs into BJP was to strengthen the party. Kavalekar said they decided to join BJP for the development of their constituencies. “We don’t want to remain in the opposition forever,” he said. The entire drama to merge the group of 10 Congress MLAs took shape on Tuesday. Sources said the decision by these MLAs to join BJP was taken after they were slighted by GFP president and deputy CM Vijai Sardesai, who refused to leave the BJP coalition and join hands with Congress.

Sources said Congress even offered Sardesai the chief minister’s post after the May 23 bypoll results. Congress said the entire episode reflected the utter misuse of power adopted by BJP.