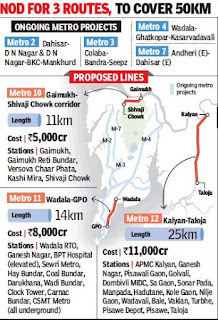 The Maharashtra cabinet cleared three metro projects that would cost Rs.24,000 crore and add 50 kilometres to the already approved metro network for the Mumbai region.

The three lines include Wadala-GPO, Kalyan-Taloja and Gaimukh-Shivaji Chowk in Mira Road. Infrastructure development has been one of the BJP’s big poll planks.

The Wadala-GPO (Metro 11) corridor will be 14 km long, cost Rs.8,000 crore and have 11 stations. The route will be entirely underground along P D’Mello Road. It will start at Wadala RTO and culminate at CSMT on the GPO side.

The Gaimukh-Shivaji Chowk (Metro 10) corridor will be 11 km long, cost Rs.5,000 crore and have five stations. Gaimukh area along Ghodbunder Road will be transformed into a vital junction for the metro where rail shuttles from Dahisar, Kasarvadavli and Kalyan will converge and terminate.

The Wadala-Ghatkopar-Mulund-Thane-Kasarvadavali metro has been extended till Gaimukh. The corridor, which will used by an estimated 11.6 lakh commuters every day, is expected to be completed by 2031; the Gaimukh-Mira Road route is expected by 2022 and Kalyan-Taloja by 2024.

The Wadala-CSMT corridor will pass through old and heritage parts of south Mumbai. So, the state will push for clearance from Mumbai Heritage Conservation Committee in a time-bound manner.

The 25 km Taloja Metro is expected to cost Rs.11,000. There will be over 15 stations on this route and it will be a key connection between central and harbour lines.

By 2022, nearly 119 km metro routes will be added to the city’s transport network. In all, a 323 km metro network has been planned across the state. Officials said as per their study, the density on suburban trains will reduce from 12 persons per square metre to 7.