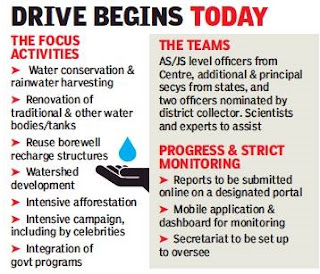 The government is set to launch the ambitious Jal Shakti Abhiyan, which aims to put in place measures for rainwater harvesting, water conservation and replenishing water bodies, at time when the Narendra Modi government is turning its attention towards water shortage in various parts of the country.

Officials familiar with the matter said high-level teams have been constituted in 254 districts before the launch of the programme, and engineers and technical staff have been placed in 1,539 blocks across the country to take stock of the ground water levels, the state of acquifers, and ponds and water bodies that may have been encroached upon over the last two decades.

“As of today, India only conserves 8% of all rainfall, which is among the lowest in the world,” said a senior official of the Jal Shakti ministry who asked not to be named. “We need to change this.” With only 4% of the world’s water resources and 16% of the global population, India’s water crisis is headed towards an inflection point.

According to a paper released in 2018 by the Niti Ayog, the state-run policy think-tank, India’s ground water in 21 cities is set to plunge to bare-minimum levels by 2020. The real problems are irregular supply, widespread contamination and growing demand in the face of declining available sources.

At a meeting at South Block last week attended by officials several ministries, including Jal Shakti and rural development, Modi said that the way the government owned the Swachh Bharat Abhiyan for sanitation and turned it into a success, it’s time to take ownership of the Jal Shakti Abhiyan and make it successful, said a second official on condition of anonymity. The first phase of the scheme will run till mid-September, he added.

The Modi government, in its second term, merged the water resources and drinking water and sanitation ministries to form a new ministry called Jal Shakti. Its scope and mandate stretches across international and interstate water disputes, the Clean Ganga project, and making drinking water accessible for all.

On June 22, the Prime Minister wrote letters to all village panchayat heads, urging them to undertake rainwater harvesting and water conservation activities in rural India. The government is likely to announce a major national water conservation policy soon. A separate high-priority conservation programme is also likely to implemented in 226 identified water-stressed districts of the country, said a third official in the know.

In addition, the government will ask all MPs to give priority to water storage works under their local area development fund.

The government also plans to award civil society and community leaders who have worked on water conservation, according to the official.

Recycle and reuse will be the focus of Jal Shakti Abhiyan in urban areas where much of the used water is dumped into rivers and other water bodies while in rural areas the target will be to promote conservation and harvesting rainwater.