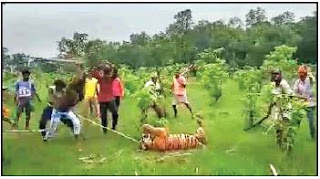 In a huge embarrassment to Pilibhit tiger reserve authorities, an adult tigress that had injured nine people in Mataina village in Pilibhit district on Wednesday afternoon was trapped and brutally beaten to death by villagers on Thursday. The incident took place even as a team of forest officials was stationed closeby. The villagers even didn’t let the injured tigress be taken to hospital and it succumbed to severe injuries a few hours later. An FIR has been lodged against 31 identified and 12 unknown people.

The autopsy conducted by a panel of three veterinarians ascertained that the tigress “died of injuries” inflicted upon her by the villagers. Pilibhit district magistrate Vaibhav Shrivastav said, “Some of the attackers have been identified, while efforts are on to identify others.”

The DM has also ordered a magisterial inquiry to probe the role of forest officials in the incident.

According to PTR field director H Rajamohan, “The tigress’ had sustained fractures and injuries by sharpedged weapons on almost every part of its body. The big cat had broken ribs and it was cremated after the autopsy.”

According to eyewitnesses, the tigress had injured nine persons on Wednesday. After it attacked a youth on Thursday, the big cat was surrounded by villagers, armed with lathis and spears, who brutally assaulted it.