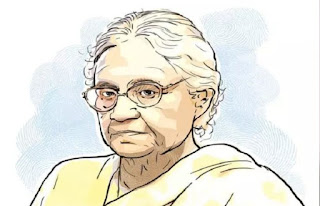 Sheila Dikshit, the three- time chief minister of Delhi, died at a private hospital in New Delhi on Saturday. She was 81 years old.

In her last big political assignment, she was named the Delhi Congress chief, making a political comeback at the age of 80 to try and revive the party’s fortunes in the battle for the Capital’s seven Lok Sabha seats in the 2019 general elections.

Dikshit, also the former governor of Kerala, contested unsuccessfully from North East Delhi in the just concluded national elections. The Congress, though did not win any seats in the polls, but managed to secure the second position in all seats and pushed the AAP to the third spot.

As the news spread, tributes started pouring in for the Congress leader. “Just now got to know about extremely terrible news about the passing away of Sheila Dikshit ji. It’s a huge loss for Delhi & her contribution will always be remembered. My heartfelt condolences to her family members. May her soul rest in peace,” tweeted Delhi CM Arvind Kejriwal.

Dikshit was the longest-reigning chief minister of Delhi, serving for 15 years from 1998 to 2013, when the advent of the Aam Aadmi Party ended Congress’s rule.

Congress leader Rahul Gandhi said he was “devastated” to hear the passing away of the veteran leader. “I’m devastated to hear about passing away of Shiela Dikshit Ji, beloved daughter of Congress Party,with whom I shared a close personal bond. My condolences to her family&citizens of Delhi, whom she served selflessly as a 3 term CM,in this time of great grief,” Rahul said in his tweet.

Fortis Escorts Heart Institute said in a statement that Dikshit was brought to the hospital in a critical condition with cardiac arrest. “A multi-disciplinary team of doctors, led by Dr Ashok Seth, Chairman, Fortis Escorts Heart Institute, carried out the advanced resuscitative measures. Her condition stabilised temporarily. However, she had another cardiac arrest and despite all the resuscitative efforts, passed away at 3:55 pm.” said the statement.