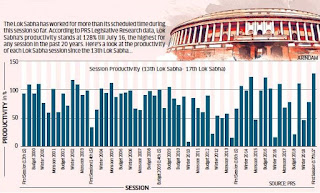 The first session of the 17th Lok Sabha is turning out to be the most productive session so far in the history of the lower house. With the newly elected members of Parliament clocking unprecedented hours, working till 12 midnight on many days, the new session has so far registered record productivity of 128%, as per statistics collated by non-profit organisation PRS Legislative Research.

Productivity here refers to the number of hours the house actually functioned as a percentage of the number of hours officially earmarked for it to work. The Lok Sabha official working hours are from 11 am to 6 pm, with an hou rlong break between 1 and 2 pm.

The ongoing session of Lok Sabha, which started on June 17, has already functioned for 150.2 hours till July 16, according to PRS Legislative Research. The session will end on July 26.

Budget sessions usually register higher number of hours with MPs discussing demands for grants of different ministries threadbare. But the current session has surpassed all the previous budget sessions. The most Lok Sabha MPs worked before this was during the budget session of 2015 when the house functioned for 246.02 hours, registering productivity of 122%. Budget Session 2016 recorded 198.2 hours at 121% productivity, the data showed.

All those extra hours that the MPs are putting up in the lower house discussing demands for grants of ministries, though, is not going too well with the support staff and security officials.

Special arrangements are made for their meals, but officials rue the long working hours without any over time.