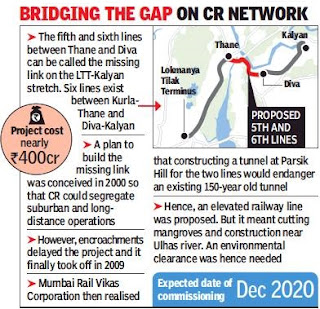 The fifth and sixth railway lines between Thane and Diva, which have been in the making for nearly a decade, has got a boost with the Maharashtra Coastal Zone Management Authority allowing construction of an 1.4 km elevated section near the Mumbra creek. The railway bridge will be constructed over the Mumbra bypass road, which connects Thane to Navi Mumbai, and a 500 m portion of it will run along the Ulhas river.

The two Central Railway lines when completed will help segregate outstation and suburban train operations between Kurla and Kalyan. Six lines exist from Kurla-Thane and Diva-Kalyan.

The MCZMA clearance was required as 37 mangrove trees need to be cut and also because of the flyover’s proximity to Ulhas river. The Bombay high court has already approved cutting of mangroves “in public interest”. The MCZMA, while forwarding the project proposal to the State Environment Impact Appraisal Authority, has placed conditions on the bridge construction such as no debris dumping in Coastal Regulation Zone and on the beach. Also, no chemical manufacturing or processing will be allowed on the spot and five times the destroyed mangroves need to be replanted.

The plan to add the two lines—fifth and sixth—on Central Railway was proposed in 2000 but work finally started only in 2009. The work was chiefly obstructed due to encroachments and squatters refusing to vacate. Also, according to the initial plans, a tunnel was to be constructed through Parsik Hills near Mumbra to make way for these lines. However, it was observed that the boring work could harm an existing 150-year-old railway tunnel and hence, the plan was dropped.

The project is a joint venture between Indian Railways and the state while it is being executed by Mumbai Rail Vikas Corporation.

Officials said that the elevated line is already under construction and would be completed by December 2019. “Thereafter, it would be connected to the railway yards at Thane and Diva. While the target is to commission the fifth and sixth lines by March 2020, it may actually happen in December 2020,” said an MRVC official. The project has been delayed by 12 years and its cost has shot up from Rs.130 crore to over Rs.400 crore.