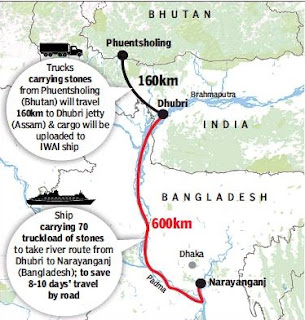 Now it will be easier and cheaper for Bangladesh to get construction material like stone chips from land-locked Bhutan after India opened its river route (Brahmaputra) to transport raw materials between the two countries.

The first ship carrying nearly 70 truckload of crushed stones from Bhutan started its journey from Dhubri riverport in Assam to Narayanganj in Bangladesh on Friday. “This is the first time an Indian waterway is being used as a channel for transport of cargo between two countries, using India for transit,” shipping minister Mansukh Mandaviya said while flagging off the ship.

Inland Waterways Authority of India chairman Pravir Pandey said the stone aggregates were transported by trucks from Phuentshiling in Bhutan which is 160 km from IWAI’s Dhubri jetty in Assam. The ship will cover 600 km in six days to reach Narayanganj, he said.

IWAI, which is responsible for developing and maintaining national waterways, has carried out dredging on Brahmaputra to maintain an assured draft in navigation channel. Brahmaputra has been declared as NW-2.