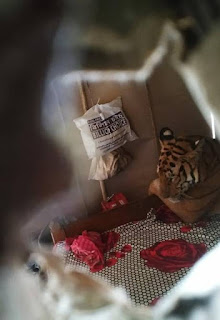 A Royal Bengal Tiger emerged from a flooded Kaziranga National Park on July 18 morning, took refuge in a house on the fringes and found a ‘bed’ to rest on.

Park officials said the animal, possibly a female, was spotted at 8.30 a.m. near the national highway along the southern edge of the KNP. It was moving out of the park about 200 m away and was on its way to the hills of Karbi Anglong district, about 500 m across the highway.

“Probably disturbed, the tiger turned and jumped across the tinned wall of a scrap godown and decided to take rest in an adjoining room,” an official said.

The godown owned by one Motilal, opposite a dhaba, is in Harmoti village, about 1.5 km from the KNP’s Bagori Range office.

KNP Director P. Sivakumar said a rescue team was exploring ways to provide a safe passage for the animal into the forest without capturing it.

Although the 430 sq. km. KNP is known more for its one-horned rhino, it has one of the highest concentration of tigers in the world. A census in March 2017 said the park had an estimated 102 tigers.