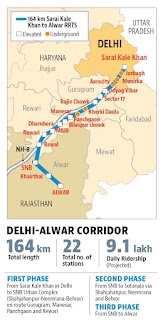 The Rajasthan government approved the detailed project report for the first phase of the Delhi-Gurugram-Alwar Regional Rapid Transit System corridor that will reduce travel time between Sarai Kale Khan in Delhi and Alwar to 117 minutes. Right now, it takes three hours to cover the distance.

The Regional Rapid Transit System is a central government project aimed at providing faster connectivity in the National Capital Region besides checking the rising air pollution and decongesting road traffic.

The NCRTC Board, the implementing agency for the project, approved the Delhi-Gurguram-SNB corridor (106 km) DPR in December 2018, the official said.

In the second phase, the corridor will be extended to Sotanala. It will reach Alwar in the third phase, covering a total distance of 164 km. There will be 22 stations on the corridor in three phases.

In the first phase (Delhi-Gurugram-SNB), the corridor will have 11 stations on the elevated 71 km, and the remaining 35 km will have 5 underground stations, mostly in Delhi and Gurugram.

After the approval from the NCRTC Board and the Haryana government, pre-construction work such as geo-technical investigation and mapping of underground utilities are in progress, NCRTC CPRO said. NCRTC has also commissioned its site office in Gurugram to expedite the work on the corridor. The pile load test is expected to begin soon.

The RRTS trains will be air-conditioned and have an average speed of 100 kmph. The trains will be available at a frequency of every 5-10 minutes. There would be priority seating arrangements

for people with special needs and a business class and ladies coach in every train, the DPR says. This RRTS line will pass through the urbanized and industrialized areas of Haryana and Rajasthan and connect Delhi airport through Aerocity, increasing the connectivity in entire NCR.

The corridor will strengthen the regional transport infrastructure

by providing a fast, safe, comfortable and reliable mobility option to the residents of Delhi, Gurugram, Rewari, Manesar, Daruheda, Bawal and nearby areas. This will help in decongesting Delhi and its roads, providing citizens the choice to live and work in different regional nodes.

All the corridors will be integrated with the Delhi Metro.