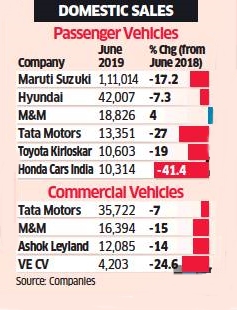 Passenger car sales shrank by double digits for the third straight month in June as buyers continued to be put off by higher interest costs following the non-bank lending crisis and by rising automobile prices.

The end of election uncertainty in May did not revive Motown’s spirits and the numbers could increase pressure on the Narendra Modi-led NDA government to open the purse strings in this week’s budget to spur lending and growth. Finance minister Nirmala Sitharaman will present her first budget and the Modi government’s seventh on Friday amid a sharp consumption slowdown.

The motor industry estimates that passenger vehicle sales fell by about 19% to 222,000 units in June, the third straight month of double-digit declines. Vehicle sales had fallen 17% in April and 20.5% in May.

Market leaders Maruti Suzuki and Hyundai Motor India led the drop, with wholesale volumes declining by 17% to 111,014 units and by 7.3% to 42,007 units, respectively.

“The elections got over towards the end of May. Demand cannot revive overnight. The budget, new policies are yet to be announced by the government,” Maruti Suzuki chairman RC Bhargava told ET. “That said, wholesale numbers do not reflect the demand on ground. If we look at retail data on a month-on-month basis, it will give a better picture of consumer sentiments.”

Data with the Society of Indian Automobile Manufacturers shows retail sales of passenger vehicles declined by 1.28% to 264,035 units in April and by 1.46% to 270,048 units in May. The retail data for June is yet to be announced.