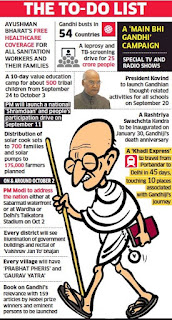 Over 15 ministries and departments will swing into action to implement another raft of ambitious activities the Centre has approved to commemorate the 150th birth anniversary of Mahatma Gandhi.

The latest list includes Ayushman Bharat’s free healthcare coverage for all sanitation workers and families, Gandhi busts in 54 countries, leprosy and TB-screening drive for 250 million people, a ‘Main Bhi Gandhi’ campaign, special TV and radio shows and mass activities. This was decided by Committee of Secretaries, chaired by the Cabinet Secretary, at a meeting of on July 11.

Keeping in mind Gandhi’s commitment towards sanitation, Ayushman Bharat will cover all sanitation workers and their families and 150 PMJAY e-cards be distributed in every block of 150 most-backward districts. A national action plan for total elimination of manual cleaning of sewers and septic tanks by 2022 will be unveiled; 15,000 sanitation workers will be given skill development training. The culture ministry — the nodal ministry for the commemoration — will launch a ‘Main Bhi Gandhi campaign’ asking citizens to take a pledge committing themselves to Gandhian ideas. The MEA will coordinate global conference on Gandhi at the UN that will be held on September 24. The MEA will also preside over unveiling of Gandhi busts in 54 countries.

Also, the HRD ministry plans to hold a 10-day value education camp for about 500 tribal children from September 24 to October 3.