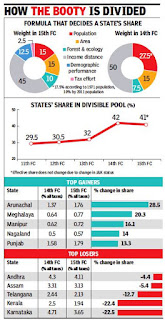 The 15th Finance Commission left the share of states in central taxes virtually unchanged for the next financial year, but its revamped formula for how the proceeds are allocated between states will result in significant gains for Maharashtra, Rajasthan, Arunachal Pradesh and Bihar. The southern states of Karnataka, Kerala, Telangana and Andhra Pradesh are the biggest losers.

Its report for 2020-21 was tabled in Parliament on Saturday. The panel, headed by former bureaucrat and lawmaker NK Singh, is due to submit its final report later this year.

It has suggested that states be given 41% of the Centre’s net tax receipts during the next financial year, as against 42% for 2015-16 to 2019-20, arguing that the 1 percentage point change was on account of Jammu & Kashmir and Ladakh being converted into union territories. The share of the erstwhile state of J&K was estimated at 0.85% of the divisible pool. The 14th Finance Commission had increased the share of states from 32% to 42%.

A part of the change in the relative share of the states may be on account of the change in criteria and weights for what is called the horizontal devolution. Unlike its predecessor, the 15th Finance Commission has used the 2011 Census as the sole criteria for population but has reduced the weight for population to 15% from the earlier 27.5%. While retaining the 15% assigned to geographical area, it has enhanced the focus on forest and ecology from 7.5% to 10%.

It has also reduced the weight of income distance (how much lower or higher than the national average a state is) from 50% to 45% to provide higher devolution to the states with lower per capita income. Demographic performance and tax effort have been brought in as parameters to reward the states performing better on both these counts.

Through the new mix of parameters, the 15th Finance Commission has sought to address concerns that some of the states that had managed to control the pace of population expansion were being ‘penalised’ for this achievement.

Some of the Commission’s recommendations, including using the escape clause to trigger a half-apercentage point easing in the fiscal deficit target, have already been accepted. In fact, a few years ago, Singh headed a panel on Fiscal Responsibility and Budget Management Act that had originally made a case for allowing the Centre to deviate from the fiscal consolidation plan in case of exceptional circumstances.

The Commission’s recommendation on performance based incentives for agriculture have also been acted upon by finance minister Nirmala Sitharaman with states being encouraged to enact model laws on land leasing, agriculture produce and livestock marketing and contract farming to avail of grants from 2021-22.

There are a host of other reforms on which the 15th Finance Commission has prodded states to move — from reducing power sector losses to education and development of aspirational districts and blocks — indicating that it will offer incentives for the better-performing states through grants-in-aid when it presents its recommendations for the next five years.

For the time being, it has proposed special support for large cities such as Delhi to incentivise an improvement in air quality. The Commission has also recommended the creation of disaster mitigation funds at the central and state levels, which will be in addition to the disaster relief funds already in place.