Bareilly finally gets its ‘jhumka’ 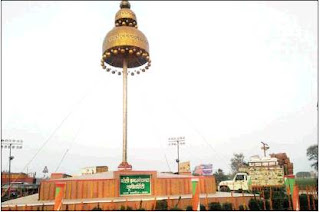 Bareilly finally got its much-awaited ‘jhumka’ when Union Minister and local MP Santosh Gangwar unveiled a 14-foot high replica at the zero point on national highway 24. The jhumka that weighs over 200 kilograms was installed in the Parsakhera area. It is embedded with colourful stones and decorated by the city’s famous ‘zari’ embroidery. Bareilly’s jhumka – though there is no connection between the city and the piece of jewellery – became a national obsession with the 1966 chartbuster ‘Jhumka gira re Bareilly ke bazaar mein ’ song. The song from the 1966 film ‘Mera Sayaa’continues to be remembered even 54 years later