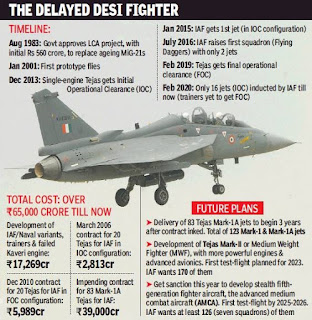 The biggest deal in the indigenous military aviation sector has been finalised, with the overall cost of the IAF acquiring 83 single engine Tejas fighters and their support package from defence PSU Hindustan Aeronautics Limited being slashed from the earlier around Rs.56,500 crore to Rs.39,000 crore.

The over Rs.17,000-crore reduction in overall cost has come after hard-nosed negotiations spread over a year. The defence ministry and IAF were initially shocked at the “exorbitant price” being demanded by HAL to produce the 83 Tejas Mark-1A jets along with the maintenance and infrastructure package.

It was in November 2016 that the Defence Acquisitions Council had first approved the procurement of 83 Tejas jets at a cost of Rs.49,797 crore. But HAL had responded with a quote of around Rs.56,500 crore, which led to protracted cost negotiations.

Down to just 30 fighter squadrons (each has 18 jets) when at least 42 are required for the requisite deterrence against Pakistan and China, the IAF is banking upon the long-delayed light combat aircraft Tejas to make up for the free fall in numbers.

The first four Rafale fighters will touch down at Ambala airbase in May, with the remaining 32 following in batches by April 2022 under the Rs.59,000 crore deal inked with France in September 2016. But the slow production rate of the home-grown Tejas jets by HAL, much like its protracted development saga, remains a major concern for the IAF.

The IAF’s ‘Flying Daggers’ squadron at Sulur has till now inducted only 16 of the original 40 Tejas Mark-1 fighters, which were all slated for delivery by December 2016 under two contracts worth Rs.8,802 crore inked earlier.

“The flight testing for Tejas Mark-1A will hopefully be completed by 2022. After these 123 fighters, the IAF is also looking to induct 170 Tejas Mark-2 or the MWF (medium weight fighters) with more powerful engines and advanced avionics,” another source said. But the Tejas Mark-2 and the indigenous stealth fifth-generation fighter aircraft called the advanced medium combat aircraft (AMCA) will take several years to fructify. For now, IAF is keeping its fingers crossed the Tejas Mark-1A does not get delayed any further.