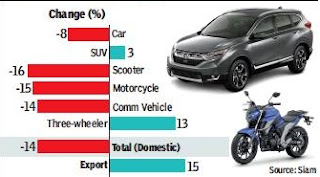 Car sales started the new year on a tough note as numbers fell by 8% in January with consumer demand remaining weak and companies clearing stocks ahead of the BS6 transition in April.

However, buoyed by new models and entry of fresh brands, SUV sales managed to register a small growth, moving up 3%, though analysts find the positive traction slower than what is generally due.

According to numbers released by industry body Siam, cars sales stood at 1.6 lakh units as against 1.8 lakh units in January last year. Siam registers wholesale numbers, and the weak volumes are also a reflection of the efforts of the companies to not build up large inventory levels at dealerships.

With BS6 getting implemented from April, companies are in the process of clearing existing BS4 models, which will not be allowed for sale from 2020-21. “The wholesale numbers are lower as companies are not flooding dealerships with heavy inventory. Most of them have managed to reduce the stock level over the past few months through heavy discounts and clearance schemes,” an industry analyst said. The auto industry has registered its worst fall in over two decades last year as the slowdown in GDP, difficult financing, job losses, and general consumer pessimism over economic growth saw buyers stay away from new purchases.

Companies such as Maruti, Honda, Hyundai and Toyota have said sales in 2020 will not be easy, though single-digit growth can be expected due to positive movements in demand around the year end. Companies have so far been cautious in committing fresh investments towards expansion, or hiring of new staff.

A majority of launches slated for this year are in the SUV category, and those looking to drive in new off-roaders include Kia, MG Motor, Hyundai, Tata Motors, and Mahindra & Mahindra.

The situation is equally challenging on the two wheeler front where wholesale deliveries have been lean too. Sales of scooters are down by 16%, and motorcycles are also lagging by a similar degree. And, economic slump has also kept the demand for commercial vehicles weak. January numbers were down 14%.