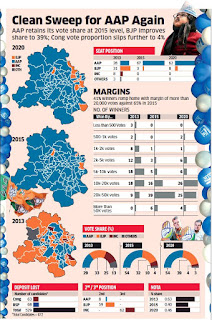 Following a highly polarized poll battle, the Aam Aadmi Party repeated a historic win in Delhi, bagging 62 seats in the 70-member assembly. The opposition BJP, which was confident of victory, managed to increase its tally from three to eight seats and recorded a marginal increase in its vote-share from 32.1 per cent in 2015 to 38.52 per cent this time.

The Congress, which had ruled Delhi from 1998 to 2013, drew a blank for the second time in a row. In the absence of a strong leader to helm the party’s campaign and state unit, the Congress’s overall vote-share dipped from 9.8 per cent in 2015 to 4.36 per cent on Tuesday. The AAP’s vote-share showed a slight dip to 53.65 per cent from the 54.31 per cent last time, factoring in the loss of five seats from its previous tally in 2015.

After losing every election except one bypoll in Delhi in the past four years, AAP made a comeback that most party leaders attributed to a conscious change in strategy since mid-2019. Sources said that when Kejriwal reached out informally to poll strategist Prashant Kishore last June-July, the two men took a hard look at where the party had been going wrong. “We had to go back to the basics. Calling Narendra Modi a psychopath did not really work for the party, not because people love Modi but because the Delhi voter did not elect Kejriwal to play the role of the main Opposition. He was elected to serve as the CM of Delhi. So he went back to doing what he was in his domain,” said a top party leader.

At the same time Kejriwal made conscious efforts at changing his image from a ‘romanticised anarchist’ and the ‘angry erudite leader’ to an ‘affable leader, the bada beta or bhai of the family.’ The posters and advertisement campaigns changed around this branding and the CM made appeals to the people such as not to celebrate Diwali with crackers or for women to take a stand on their safety. On Tuesday too Kejriwal wooed a swarming crowd of party workers and supporters at the AAP headquarters and thanked Delhi for the victory adding, “Dilliwalon, I love you.” Flanked by top party leaders and his wife Sunita, Kejriwal remained informal, “Today is my wife’s birthday. I have already had my cake…ab aapko khilaunga”. The cake that he referred to was good governance in the next five years.

Through the Delhi poll campaign he refrained from talking about Ram Mandir, Citizenship Amendment Act and Shaheen Bagh, refusing to engage with the BJP on issues that were beyond his ‘job description.’

In Kejriwal’s third term as chief minister, he is set to widen his ambit and move beyond education and health. Senior party leaders said that infrastructure will be a top priority and in its assessment during the elections, the party had learnt of grievances against poor transport and infrastructure.

In his second term, AAP had stalled the Phase 4 of Delhi Metro over a stand-off with the Centre on free metro rides for women. The Delhi government had phased out several buses and failed to bring in new buses. Women’s safety, an issue for which AAP blamed the Centre as Delhi Police reports to the Home Ministry, will also be a priority.

AAP leader Ajoy Kumar, a former IPS officer known for his valour as the superintendent of police in Bihar and Jharkhand, has been asked to ensure women’s safety.

Raghav Chadha and Atishi may hold key portfolios like finance, education and social welfare. In the previous government, Marlena had worked closely with education minister Manish Sisodia to revamp the state education system until she had to be dropped owing to objections from the Centre. Chadha has served as AAP treasurer, and as per an insider, ‘he could be the one reading the next budget’ of the AAP government.

Jasmine Shah, who headed the Delhi Dialogue Commission, a think tank of the government, and supervised the Chief Minister’s Office in the last few months, may play a larger role.

As BJP chief JP Nadda had taken over the reins of the party just a couple of weeks before the polls, Shah, who is called the modern Chanakya for his poll strategies, had orchestrated the campaign from behind the scenes. In a bid to overcome factionalism, the party did not name a CM candidate. But none of these strategies worked.