Exports fall for 6th month in a row 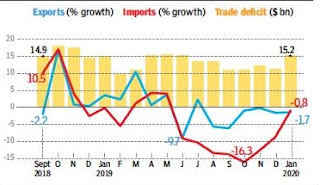 India’s exports fell 1.7% in January, the sixth straight monthly decline, while imports dropped for the 10th month in a row, pushing up trade deficit to a seven-month high of $15.2 billion.

Data released by the commerce department estimated exports at $26.4 billion in January, while imports were pegged at $41.5 billion.

Data showed this was the first time in nearly six months that the pace of import contraction was slower than pace of decline in exports. The decline in exports was visible across a majority of the sectors, with 18 of the 30 major segments seeing a contraction in the value of their shipments during the month. Leading the fall was oil meals (down 43%), rice (18%) and cashew (13%), while iron ore (114% jump) and electronics (40%), led by mobile phones, providing support.

A large part of the fall in imports is attributed to lower economic activity.

Economists warned of adverse impact of the corona virus on trade in the coming months.