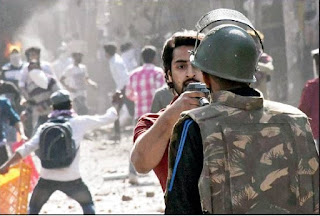 A day after riots were reported over the controversial Citizenship Amendment Act in north east Delhi, violence and arson intensified across the area, prompting Delhi police to impose section 144 of the Criminal Procedure Code in 10 locations.

After a period of brief calm on Sunday night, pro- and anti-CAA protestors took part in the unrest yet again on Monday afternoon as police deployment watched passively. Amid apprehensions in the government that the incident of violence would “tarnish” the image of the country before US President Donald Trump as he flew into the city on Monday evening, several contingents of paramilitary forces were deployed to clamp down on rioters.

A head constable of Delhi police, Ratan Lal, succumbed to injuries due to stone pelting in Gokulpuri, while three civilians died in Jaffrabad. As per initial reports, the civilians died of gunshots. Deputy commissioner of police of Shahdara, Amit Sharma, sustained injuries, along with close to three dozen paramilitary personnel and other protestors. As violence on ground spiralled, Delhi commissioner of police Amulya Patnaik reached the control room to monitor the situation, while Union home minister Amit Shah stepped in to oversee arrangements and bring the situation under control. Delhi chief minister Arvind Kejriwal dialled lieutenant governor Anil Baijal, who issued a statement saying that the situation was being monitored and called for peace and restraint. Aam Aadmi Party Cabinet ministers also issued separate appeals for calm.

“I want to warn that we will not tolerate violence and those who go against the Constitution. Strict action will be taken. Our government has given instructions to Delhi police that those responsible for the death of our head constable and for damage to property will be dealt with strictly. A full inquiry will be conducted. Additional forces have been brought in. Law and order is our top priority,” said G Kishan Reddy, minister of state, home affairs. Blaming the Opposition for loss of face before Trump, he added, “Rahul Gandhi, Congress and anti-CAA protestors should explain who is responsible for tarnishing the image of India in front of the world.”

On Sunday, Bharatiya Janata Party leader Kapil Mishra had raised a call for all CAA supporters to gather at Maujpur-Baburpur Metro station for a demonstration backing the legislation. In an address to the crowd in the presence of police personnel, Mishra said, “We are holding back till Trump’s visit but after that if you still do not clear the road, we will not be able to do anything.”

Later on Sunday, the crowd turned unruly and started moving towards Jaffrabad where anti-CAA protestors had blocked a main road protesting against the law. The groups pelted stones at each other, injuring 15 persons, including media personnel and policemen.

Though the situation was under control through Sunday night, fresh violence erupted on Monday afternoon as rioters set at least two cars, motorcycles, trucks and shops ablaze. It is not clear which side indulged in rioting and arson first, but locals pointed out that the clashes could have been averted had the police taken adequate precautions.

In view of the violence on Sunday, anti-CAA protestors had used a rope to barricade the road leading to their protest site. But locals alleged that Delhi police — instead of keeping both sides apart — watched passively as they menacingly walked towards each other. Locals said CAA supporters raised ‘Jai Shri Ram’ slogans and provocative chants as they walked towards the anti-CAA protest site in Jaffrabad. Petrol bombs were hurled amid incessant stone pelting. Even as the police fired tear gas shells, rioters continued to set shops and vehicles on fire. A man opened eight rounds of fire in the air standing close to an unarmed policeman. No arrests have been made yet.

Some of the videos shared by eyewitnesses show police personnel also pelting stones, while images shared by locals claimed to show saffron flags strung up at houses of Hindu residents, pointing to alleged premeditation of the riots.

“Some incidents of violence and arson have been reported in the areas of north east district, particularly in Maujpur, Kardampuri, Chand Bagh and Dayalpur. It is appealed to the people of Delhi and particularly to the north east district to maintain peace and harmony. People should not believe in false rumors,” Delhi police said in an official statement. Asking media not to circulate any disturbing pictures that could further aggravate the situation, police said CrPC section 144 was imposed in the district’s affected areas. Entry and exit gates of Jaffrabad, Maujpur-Babarpur, Gokulpuri, Johri Enclave and Shiv Vihar were shut down and trains were made to terminate at Welcome Metro Station.