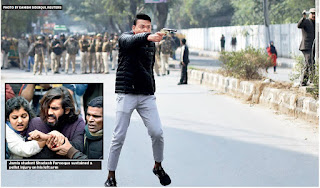 ‘Yeh lo azaadi’, Rambhakt Gopal yelled as he opened fire at the crowd that had gathered at Delhi’s Jamia area to protest against the Citizenship (Amendment) Act. Before firing a shot that injured a protesting student, Gopal, whose age is yet to be verified by the police, kept ranting as he walked backwards where Delhi Police personnel stood watching, a video of the incident showed. Later, a lone policeman came forward and calmly grabbed the Jewar resident and that too only after he fired the shot.

Following the incident, thousands joined the protesters at the spot. The movement spiralled as the agitators broke police barricades as they tried to march towards Rajghat.

The accused, according to his Facebook posts, had planned the attack in advance. He also went live from the protest site several times before the attack.

Although his Facebook account was suspended by the evening, several inflammatory posts of his from Wednesday and Thursday went viral. “Shaheen Bagh, Khel Khatam”, read one, while in his last post he asked his followers to wrap his body in the tricolour and raise Jai Shri Ram slogans during his last rites. In what seems like a series of farewell messages, he also wrote: “Take care of my house”.

In another post, he wrote, “Chandan bhai yeh badla aapke liye” in an apparent reference to Chandan Gupta, who had reportedly died in communal clashes that broke out in a Muslim-majority locality of Uttar Pradesh’s Kasganj during a ‘Tiranga bike rally’ organised by RSS-backed student union Akhil Bharatiya Vidyarthi Parishad on January, 26, 2018.

The police have registered an FIR against Gopal under the Arms Act and booked him for attempt to murder.

Home Minister Amit Shah said he had ordered stringent action in the incident and ‘the culprit will not be spared’.

Shadaab Farooque, a mass communication student at Jamia sustained injuries on his left forearm, and was rushed to Holy Family Hospital near the protest site. He was later shifted to the All India Institute of Medical Sciences, where authorities said that he had lost a lot of blood and needed a surgery to dislodge the bullet. The police also drew heavy flak for refusing to remove the row of barricades, and a bleeding Farooq had to climb on them to be able to go to the hospital.

Farooq’s friend, Aamna Asif, a third year Economics student who was at the spot when the incident took place, said, “The march was moving peacefully when suddenly from the crowd this man emerged and threatened to fire at the crowd. Shadaab was trying to calm him down.”

“We kept crying for help but the police did nothing…they were just watching … He shot while standing next to the police,” she charged.

The incident happened in a matter of seconds and by the time cops could react, Gopal had fired, the Delhi Police said.

“By the time police could react, the person had already fired. Everything happened in seconds. The case has been transferred to the Crime Branch. We are also probing whether he is a juvenile,” said Special Commissioner of Police (Intelligence) Praveer Ranjan.

Even though his identity remains unverified, Gopal’s social media profile paints a picture of a staunch right-winger. His display picture features him with Deepak Sharma, a member of the right-wing extremist group Akhand Bharat Hindu Sena. Sharma had earlier beaten up a boy for making a meme against the government and is seen in pictures with BJP leaders including Giriraj Singh.