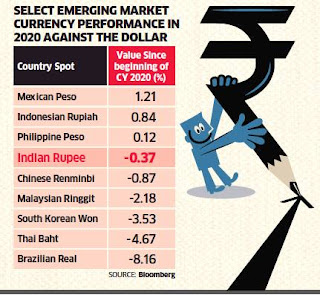 Even though the rupee lost 0.37% against the dollar in 2020, it still ranks among the top five best performing emerging market currencies. The Mexican peso has taken the top slot, gaining 1.2% against the greenback, while the Brazilian real lost more than 8% being the worst performing unit. The rupee’s relative outperformance is likely to have given the RBI good opportunity to shore up record dollar reserves especially when Mint Street has been witnessing a bout of overseas inflows since the beginning of the year.