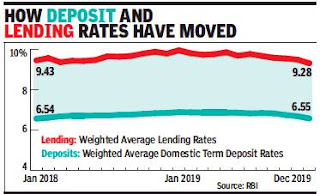 Loans for housing, auto and small businesses are likely to get cheaper even without the Reserve Bank of India’s monetary policy committee reducing interest rates. RBI governor Shaktikanta Das took some unconventional steps to bring down borrowing costs.

In his last monetary policy for the current fiscal, Das said RBI would provide cheap long-term financing to banks for up to Rs. lakh crore through long-term (one-year to three-year) repos. He also said cash reserve requirements would be waived on deposits that are used to provide retail loans between January 21, 2020 and July 31, 2020. This will make housing, auto and SME loans cheaper as 4% of deposits impounded in cash reserves will be freed.

The third measure announced to bring down cost of loans was benchmarking loans to medium-sized enterprises to RBI’s repo rate (the rate at which RBI lends to banks).

Bankers said the measures were clearly aimed at bringing down the cost of borrowing even though the six-member MPC voted to retain RBI’s repo rate at a 10-year low of 5.15%. Bankers said while the economic situation called for a boost to lending, RBI’s hands were tied because of the recent spike in inflation. The governor also highlighted risks to the economy arising out of the outbreak of the Corona virus.