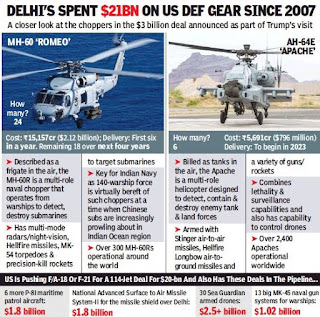 Even as India and the US inked helicopter deals worth $3 billion, the two countries also agreed to work for early conclusion of the fourth and final bilateral foundational military pact called the Basic Exchange and Cooperation Agreement for Geo-Spatial Cooperation.

The BECA, which will enable the US to share advanced satellite and topographical data for long-range navigation and missile-targeting with India, will come after India inked the General Security of Military Information Agreement in 2002, the Logistics Exchange Memorandum of Agreement in 2016 and the Communications, Compatibility and Security Arrangement in 2018. "BECA should be inked by next year," an official said.

India and the US also inked deals for 24 MH-60 ‘Romeo’ helicopters for Rs.15,157 crore ($2.12 billion) and the six additional Apache attack choppers for Rs.5,691 crore ($796 million) on Tuesday, taking the total value of lucrative Indian defence deals bagged by Washington to over $21 billion in the last 13 years.

The first six MH-60 ‘Romeo’ multi-mission helicopters will be delivered to India in a year, with the rest 18 thereafter coming over the next four years, to plug the Navy’s critical operational gap in detecting, tracking and destroying enemy submarines. The six AH-64E Apache attack choppers, in turn, will be delivered from 2023 onwards.

With the chopper deals done, the US will aim to seal the other proposed deals in the pipeline worth around $7 billion over the next couple of years. These include six more P-8I long-range maritime patrol aircraft ($1.8 billion), the National Advanced Surface to Air Missile System-II for the missile shield over Delhi ($1.8 billion), 30 Sea Guardian armed drones (over $2.5 billion) and 13 big MK-45 naval gun systems for warships ($1.02 billion).